The World of Oscilloscopes in 2011

Welcome to the first post of Joel Avrunin’s electronics blog.  Here I am going to talk about anything of interest to me technologically, with a focus on my primary interest, test and measurement.

Please add to the comments of this post and tell me about your first oscilloscope – even if it’s not Tektronix, I’d love to hear the story! 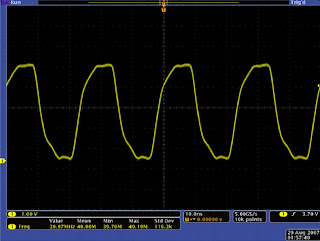 At its simplest, an oscilloscope is a tool that lets you visualize electrical signals, displaying the signal on a graph with voltage on the vertical Y-axis and time on the horizontal X-axis.

In the world of oscilloscopes, one company owns more than half the market and is about the oldest name in the industry, Tektronix.  That is my company, and though my blog will be technologically focused (and not one big ad for Tektronix), I will often use Tektronix oscilloscopes for illustration due to the fact that they are the industry standard and I do work for Tektronix.  Tektronix consistently leads the industry in bandwidth, noise performance, effective number of bits, and sampling rate.  It is a technology driven company and that shows in the many products that have come out over the years.  Other companies may occasionally beat Tektronix to a performance mile mark, but over the years, Tektronix stays consistently ahead as the market leader.  In my humble opinion, Tektronix also understands how an engineer uses an oscilloscope and still has the best user interface in the industry.

Many people think Tektronix invented the oscilloscope, but that distinction belongs to Karl Braun who invented the first oscilloscope in 1897.  Tektronix’s founders made the oscilloscope useful for the exploding digital world that was to occur following WWII through the invention of the “trigger”.  Prior to Howard Vollum and Jack Murdock founding Tektronix, oscilloscopes could display a waveform but not trigger on it.  All of that changed in 1947 with the introduction of the Tektronix 511 – the first triggered oscilloscope.  We’ll talk about why a trigger is important in later blog entries.


One thing I love about working for Tektronix is that you can find circuits in textbooks developed by Tektronix engineers, and 65 years of patents on technologies we take for granted today.  Tektronix innovated many display techniques for CRT’s and even invented the technology behind Plasma TV.  And of course, whenever Hollywood wants a laboratory to look high-tech, they always have a Tektronix scope on the rack. 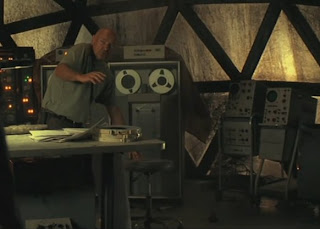 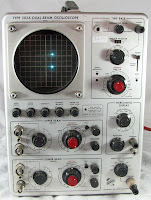 When John Locke sat at the computer in “Lost” typing those digits again and again, two Tektronix 502A Dual Beam Oscilloscopes sat behind him, doing something really important (although they never explained what!).  These dual beam oscilloscopes were immensely popular, and it is cool to see them immortalized in one of the best TV shows in recent times.

When I show a customer a new Tektronix MSO4104B, I am often treated to a story about their first Tektronix scope and how it changed their life.  Did I mention it is great to work for a legendary company?

Another major player in the world of test and measurement is Agilent (formerly known as Hewlett-Packard or HP).  Mostly known for their RF portfolio (spectrum analyzers and network analyzers), they have been in the oscilloscope market for many years.  They are still a distant number 2 player to Tektronix, but have made many improvements to their portfolio recently.  Having lagged Tektronix in bandwidth for the past 5 years, they finally introduced a higher bandwidth real-time scope last year to claim bandwidth leadership (for now….).  Recently, they introduced their own line of bench scopes, after selling OEM-labeled Rigol scopes for many years.  In the world of oscilloscopes, they are a solid #2.

Picking the number 3 company is difficult because it likely depends on how you slice the market.  In the world of performance oscilloscopes (anything above 4GHz), the only other name is LeCroy.  I used to be a design engineer at LeCroy, so I have a special place in my heart for their equipment.  What did I tell you about engineers and their first oscilloscopes? 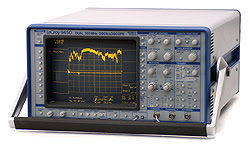 Walter LeCroy invented the Digital Storage Oscilloscope (DSO) in 1985, based largely on work done with digitizers at CERN in Switzerland.  They have had their good years and bad years.  While the digitizer quality is arguably not up to the level of Tektronix or Agilent, these oscilloscopes tend to be very popular with physicists due to the embedded analysis capabilities.  One look at a LeCroy scope user-interface and you’ll know it was an oscilloscope designed by physicists.  They also have innovative industrial design that looks “cool”.  They are also popular in Europe, likely because they still do have a design center in Switzerland and the name sounds French, but the company is based in New York.  Their base digitizer technology is not as fast as Tektronix or Agilent, but they do some interesting things with frequency mixing on their higher bandwidth scopes that currently give them the highest real-time banner specification in the industry.  They used to have a relationship with Iwatsu for the lower bandwidth/bench scopes, but I believe that recently ended and Iwatsu is marketing their own oscilloscopes, mostly in Japan.

I don’t have the market data to separate the next oscilloscope makers.  The next biggest players in the “mid-performance” market (beyond Tektronix, Agilent, and LeCroy) are likely Yokogawa and now Rohde.  Yokogawa is extremely well known in Japan, and they have some interesting products.  The user interfaces often don’t play very well with Western engineers, but I see them in the United States in automotive and power applications.  The automobile manufacturers love their lower bandwidth scopes with extremely deep memories typically only seen on higher bandwidth scopes.  Also, Yokogawa makes scopes with more than 4 analog channels.

Rohde is a pretty exciting newcomer to the oscilloscope world.  Rohde is a premier RF company based in Germany, and for years the Tektronix sales force established their name in the United States, primarily competing with the Agilent RF portfolio.  Their relationship ended several years ago, and Rohde really only participated in the low end of the oscilloscope market through their Hameg oscilloscopes.  Last year, Rohde made headlines with a new oscilloscope family going up to 2GHz.  Key features they advertise are the digital trigger, fast update rate, rapid FFT processing (spectral analysis), and adjustable display grids.  They are still a small player, but that could change in the future. 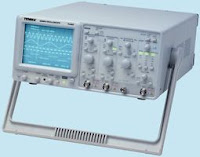 Beyond Tektronix, Agilent, LeCroy, Rohde, Yokogawa, and Iwatsu, there are a ton of smaller players when you talk “bench” scopes, or oscilloscopes less than 500MHz.  To throw out some names, there are Fluke, Siglent, Tekway, ABI, B&K Precision, ExTech, Digimess (Grundig), GW Instek, Pico Technology, Tenma (Newark), and names you will only see on eBay like Gould, Nicolet, and Leader.  National Instruments makes digitizer cards, some with Tektronix technology, but when I talk about oscilloscopes, I mean something with knobs and a screen.

That’s the world of oscilloscopes, and I hope to blog at least once a week on a topic I find interesting, or one suggested to me by a customer or a reader.  In the future, I plan to discuss what to look for in a new scope (bandwidth, sample rate, memory, ENOB, update rate, application support, probing, etc) and what to look for in a low-cost used oscilloscope.  I hope to keep my blog applicable to a home hobbyist with a $500 oscilloscope and to a power-user designing PCI-Express Gen 3 interfaces, Wideband Satellite Communication, or Radar systems.  I welcome comments as well, but please keep discussions civil.

As I said above, please fill in the comments of this article with some memories of your favorite first oscilloscope.
Posted by Joel Avrunin at 3:42 PM