First we must note that almost every oscilloscope on the market today is a digital oscilloscope.  Old-time engineers still remember and love their analog oscilloscopes.  I won’t spend too much time explaining the operation, but an analog oscilloscope is literally a Cathode Ray Tube (CRT like your old TV) where an electron beam sweeps across the display while an external signal deflects the signal up and down.  The speed of the sweep across the display is what we think of as “timebase” today, and the level of vertical deflection is like our “volts per division” today. 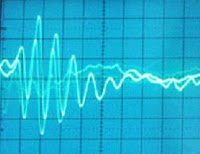 A lot of work at went into phosphor displays that could accurately display even tiny signals that dimly lit the display, and Tektronix owns many patents on the complex display techniques needed for analog oscilloscopes.  Analog oscilloscopes had a very short retrace or flyback time, the time required to create a new trace after the previous sweep.  They could update over 200,000 waveforms/second, showing infrequently occurring glitches and fast moving waveforms (like sweeps, modulations, and video signals).
While analog oscilloscopes can give you a near live display of your waveform, there is no question that today’s engineer uses a digital storage oscilloscope, often abbreviated DSO.  On an analog scope, trigger meant to start the sweep (“a triggered sweep”), so you really couldn’t see what happened before your trigger unless you went into auto untriggered mode and got lucky.  Even if you got lucky, the trace would disappear with the phosphor.  Some progress was made with analog storage scopes, but clearly something better was needed. 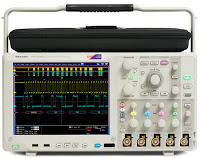 A real-time digital oscilloscope replaces the sweep across the display with a series of consecutive samples from a high-speed digitizer.  The samples go into a memory and when that memory is full, the oscilloscope processor (sometimes just an off-the-shelf PC) reads the memory and renders a trace onto the display.  The sampling is consecutive, meaning that if you are running at 1GS/s, you get a new sample point every 1ns.  In a single “shot”, you get an entire waveform.  If you had a 1000 point memory, that means you could display 1us of continuous time on your screen.  If you want to store more time, you could get a scope with more memory, or drop your sample rate.  So at 1000 points, you could store 2us at 500 MS/s, or if you want to stay at 1GS/s, you would need a scope with 2000 points of memory.
We will go back to sampling theory in a later post, but it is important for digital oscilloscopes.  The highest true single-shot sample rate real-time oscilloscope today is the Tektronix DPO72004C, with a single-shot realtime bandwidth of 100 GS/s.  That means the time between samples is 10ps.

One frustration in the architecture of digital oscilloscopes is that the time to move the data from memory to a processing system and then create a trace “raster” on the display is huge.  This means that the trace update on the screen is orders of magnitude slower than an analog scope, and is a large reason that the first digital scopes were immensely unpopular.  Years ago Tektronix largely solved this problem with a dedicated custom ASIC to render traces in hardware and put them directly on the display, achieving update rates similar to analog oscilloscopes.  This technology has gone by many names, from InstaVu, to FastAcq, and today DPX, and is why Tektronix calls their oscilloscopes “Digital Phosphor Oscilloscopes” or DPO.  Today many other vendors have copied this in one way or another.
Now a real-time oscilloscope does not need to trigger.  It can just capture the next asynchronous piece of data and display it.  This is called AUTO trigger and is similar to the function on an analog oscilloscope.  However, a real-time oscilloscope can also trigger on data.
The distinction in triggers is that on an analog scope, trigger means start.  On a digital scope, trigger means stop. 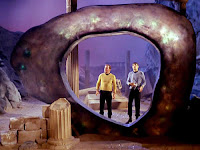 Picture memory as a big FIFO (first-in first-out) set of data.  Data streams in and out non-stop.  Suppose you have 1000 points (or 1k in scope speak) and trigger is set to 50%.  Memory fills and empties non-stop, and the scope displays nothing in normal trigger mode.  When a trigger event happens (an edge or something more complex), a trigger flag is set at Point 1000.  Memory continues to fill, points 1-499 fall out of memory and point 1000 slides back to become point 500 while data streams in past it.  When the scope stops and displays, I have 499 points before the trigger and 499 points after the trigger.  Those points before the trigger are known as “pre-trigger data” and those after are “post-trigger data”.  Yes—I can see the past and the future, no DeLorean or Guardian of Forever required!
Hence, real-time oscilloscopes are real-time because they have real-time triggers that constantly monitor data (missing nothing), and they digitize a signal with consecutive real-time samples.  Can I say real-time again?

Most oscilloscopes are real-time oscilloscopes, going as high as 100GS/s today.  The digitizers behind these systems are generally 8-bits in resolution, so the waveform is stored as 256 distinct voltage levels.  We’ll discuss bandwidth later, but real-time technology hits a wall at about 32GHz in absolute bandwidth (currently offered by Agilent with 80GS sampling). 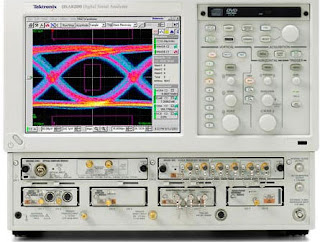 So what is equivalent time sampling?  The base digitizer is remarkably slower than a real-time oscilloscope, often in the order of kilo-samples/second instead of giga-samples per second.  A Tektronix DSA8200 samples at up to 200ks/s.  The input bandwidth, however, can exceed 70 GHz.  How is this possible?  Equivalent time sampling oscilloscopes do not operate without a repeated signal and phase-coherent trigger.  Phase coherent means that the trigger signal occurs at the same point in the waveform being tested every single time.  Whereas a real-time oscilloscope looking at 1000 samples will measure Sample 1, then 2,3,4,5,6,7….1000, an equivalent time oscilloscope would fill 1000 samples by triggering and then measuring 1 sample at a time.  They need not be sequential, so on the next trigger, it might get sample 200.  On the next trigger, it might get sample 600.  In other words, it fills 1000 points over many triggers, hence why the signal must repeat.  Also, the trigger path is a separate connector, so you must either split a repeating signal to create your trigger or supply a trigger from an external clock source.  Now most equivalent time sampling oscilloscopes today use "sequential sampling", so samples go 1,2,3,4,5,6,7,8,9,10.... but each trigger still yields only 1 sample.

Sampling oscilloscopes might fall into the more purpose-driven category I discussed in my last post.  They require understanding your signal and what you seek to measure.  You can’t just poke your circuit and expect an answer.  Many have sought real-time oscilloscopes in applications that used to be used for sampling oscilloscopes as a result.

So that’s some clarification on analog oscilloscopes, digital storage oscilloscopes, and sampling/equivalent time oscilloscopes.  Next we’ll tackle how much bandwidth do I need for my signal?
Posted by Joel Avrunin at 12:20 AM