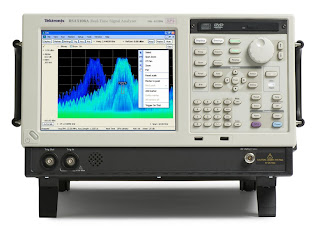 I wanted to take a break from my normal blogging to discuss a new book I just read called "Cognitive Radio Communications and Networks: Principles and Practice".  In addition to being a scope guy, I also support the Tektronix Real Time Spectrum Analyzer, a very popular tool for software defined and now cognitive radio development.  The RSA allows you to visualize live RF in real-time (and then trigger and capture it), so it is a great tool for software defined radio development.  As a result, I am often brought to customers and regulatory bodies that are investigating the technology behind cognitive radio and need our equipment to verify operation.  I got this book to improve my own knowledge in the field.
The book provides a basic overview of Software Defined Radio, but assumes that most readers are already familiar.  For those just getting into it, software defined radio refers to the field of creating modulations in software, often with D/A and A/D technology rather than typical hardware.  The advantage, of course, is that your radio can be completely agile, with everything from tuning frequency, hop patterns, modulation type, symbol rate, and filtering adjustable via software.  You could use your digital circuit to generate I and Q and a discrete modulator for IF.  You could use a fast DAC to generate your IF and a mixer to produce RF.  Or as technology improves, you could use the DAC to generate your signal directly at RF.   With Tektronix components, you could design a radio that tuned from DC to 9.5GHz entirely in software!
The book focuses on cognitive radio, or the ability of radio to be aware of its environment so that a radio can increasing the efficiency of the RF environment by dynamically allocating frequency bands.  While it requires SDR techniques, it goes far beyond SDR.  The field is really in its infancy, with many opinions as to how (and if) we should move to cognitive radios.

In fact, I personally attended an event held by SMPTE in Washington DC back in 2009 where various industry experts discussed the problems and possibilities of "white space" devices:

In essence, broadcasters pay for dedicated RF spectrum for their stations, and there are white spaces, or unallocated bands that some in the industry say should be permitted to devices that have some way to dynamically allocate spectrum and pick where to broadcast.

In theory, it sounds great--if nobody is using a piece of spectrum, why can't I transmit there?  But suppose you bought yourself a $1 million dollar mansion on a sprawling lot.  How would you feel if people started setting up campsites in the area between your property line and the curb?  Would you call the police or accept that the land is not "in use" so anybody can use it?  Even better, would you let people inside your house to use it while you were out so long as they promised to leave when you got home?  Broadcasters are concerned that white space devices may unintentionally interfere with their signals for which they paid significant sums of money.

The technological hurdles are big and there are a lot of conflicting ideas.  What rules should devices use when deciding where they can transmit?  What types of communications are appropriate for use with CR?  Should only certain bands be dedicated for it?  And who writes the rules?

The layout of the book is clear and direct.  The author assumes you know about digital modulation, but extends your knowledge with discussions of digital modulation techniques for cognitive radio, such as M-ary Phase Shift Keying and M-ary QAM.  Challenges such as multicarrier OFDM systems, intersymbol interference, and proper pulse shaping are also addressed.  While the book is heavy on math and will appeal to those who are more analytic, there is plenty of informative text that does not depend on hard math skills.  In other words, the general technical reader will find much to be valued in this text even without strong math knowledge.

"Cognitive Radio Communications and Networks: Principles and Practice" also addresses white space issues both in the field of personal communications/public safety radios and also broadband wireless access such as 802.22.    The latest technologies in cognitive radio platforms and development are addressed such that anybody looking for an overview on the field will find use in the book.  Code is even provided for those experimenting with GNU radio.

Cognitive radio presents many challenges, such as coorperation between secondary users to properly allocate spectrum, not interfering with the primary user, and security issues that may arise from rogue users forcing other white space devices out of a spectrum space.  The book has an entire chapter devoted to security concerns.

In 736 pages, you will find a good level of detail on the entire field (and far more than some Google searches will explain), and likely enough information that you will be able to focus your studies on cognitive radio with more detailed readings in the future.  The individual essays are generally clear and approachable, and the editor did a great job of book layout to make the sizable tome accessible for a read from start to finish or to pick out particular articles of interest.  I definitely recommend this as an intro to the field.

To read through the table of contents, go to Amazon.com and they have "search inside this book" enabled.

For more information on the Tektronix RSA5000 and other tools for Cognitive Radio and Software Defined Radio design, check out the page at Tek.com.
Posted by Joel Avrunin at 10:20 AM