No sooner had I made the comment in my first blog post about Tektronix being in all the movies than people started e-mailing me with the names of movies in which they remember seeing a Tektronix oscilloscope.  Most of the time it is in the background and not the focus, but one person told me of a Tektronix Logic Analyzer being the star of a movie with Nicholas Cage.  Naturally I had to go straight to NetFlix to get the movie and find out.
Remember Face/Off from 1997 with Nicholas Cage and John Travolta?  Cage plays a bad guy who plants a bomb, so naturally when he is critically wounded, Travolta must undergo surgery to take Cage's face and find out from Cage's cohorts where the bomb is located.  After the surgery, the doctor wants to test the new voice altering chip he implanted, so naturally he turns to the Tektronix Logic Analyzer, a TLA715.  In 1997, this would have been a fairly new piece of equipment so it's surprising they were using it. 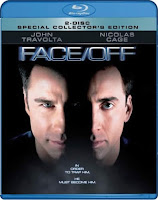 I've never seen this particular application running on a logic analyzer---perhaps it was written by one of our Applications Engineers? Either way, it's cool and I want it!
(for those who don't know, a logic analyzer is a way to acquire digital 1's and 0's, and would not be used for audio or voice analysis as is shown here):

I made a screen capture of the whole scene with my iPhone..... check it out!  Lots of up-close shots of the Logic Analyzer.

And in case you're curious, the modern equivalent would be the TLA7012, pictured below on the right, next to his big brother, the TLA7016.  Just also happens to be the fastest logic analyzer out there,so check it out! 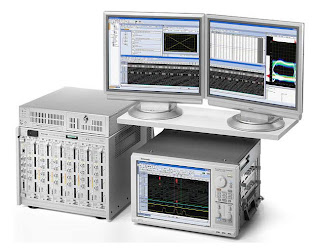