Graduation Address - Is Science the Sum of All Knowledge? 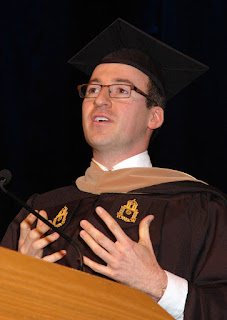 Thank You Lisa Jackson our GSA president for that introduction. Good morning President Loeschke, distinguished guests, honored faculty, family and fellow graduates.  With my undergraduate degree in engineering, I sought to answer the question, “Is science the sum of all knowledge?”  Society accepts that if you learn the science behind a system, you are now an expert who can tackle any problem.  With that mindset, I started at Towson to become an expert in business, specifically wanting to know how to manage organizational change.  If science truly is the sum of all knowledge, then just as an expert in the science of engineering can design, an expert in the science of business should be able to manage.  I foresaw going to class and learning the skills needed to not only motivate employees and monitor their productivity, but also to be an expert in all aspects of the business.  My course schedule certainly read that way – finance, project management, marketing, and accounting.  And yet it was in an economics course that I read the prescient words of Austrian economist Friedrich Hayek who asserted that the knowledge of the circumstances of time and place were more important than all of the science we can learn.  Hayek teaches us that since a manager cannot be at every decision point, he must empower those he employs to make decisions on their own.  He teaches that the further removed a decision maker is from the point of knowledge, the slower an organization will be able to adapt to change.  But if the key to management is to be hands-off, then why go to business school at all – what is the role of a manager?
To explain, imagine leaving this arena and driving up York Road to I-695.  Cars speed around Baltimore at over 60 miles per hour, and generally do not collide.  How is that possible without a single manager directing traffic?  Isn’t that anarchy?  We stay relatively safe because there are known rules for how to drive, and cars signal when they change lanes or stop.  An effective manager runs his company like the interstate.  He establishes a common vision, the rules for the road.  He acts as a conduit for communication, the turn signals of the cars.  But the decision on which way to turn the wheel when a car comes too close – that is made by the driver, not the manager.  The Maryland Highway administration would not respond as quickly as the driver behind the wheel.  When we discuss technological marvels like the iPhone, we can often slip into honoring autocratic CEOs like Steve Jobs at Apple.  Why can’t all CEO’s be visionaries like him?  But when we learn about the difficulties of working for such a controlling manager, how many of us actually wish our own bosses were like Steve Jobs?  We laud Apple’s successes, but forget the same organizational culture that gave us the iPhone also gave us the failed Apple Lisa of the 1980’s and Apple Maps of today.   Could an empowered employee have foreseen failure where the all-knowing leaders were blind? 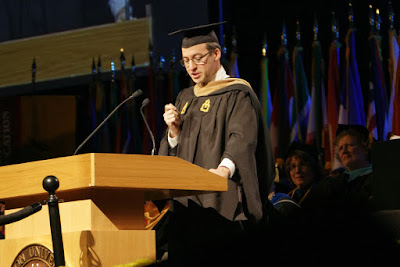 Even in our own lives, we instinctively value working not for the difficult person who micromanages us, but rather the leader who enables our own success and creates a strong organizational culture to support it.  My economics professor calls his management blog, “Giving Up Control”, and that is the greatest lesson of management, whether in corporate America or even as a parent.  I was recently promoted to sales manager and had to hand my old sales territory to a new person.  Capable though he is, he will do things differently than me.  Yet he will not be successful unless I give him the latitude to run things in his own manner, while giving him coaching and mentoring as required along the way.  As I proceed into my new management role over the next few months, I truly am “giving up control”. 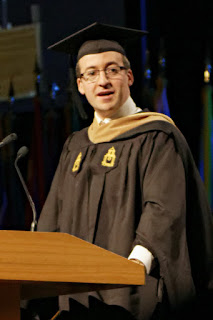 Those of us who are parents have experienced the same phenomenon.  Each of our lives is a sequence of thousands of daily decisions we make on our own.  Yet we know that effective parenting is not making those decisions for our children, but creating a common vision and framework so they are successful in their own lives.
In closing, what I’ve learned most from my Towson experience is that true success in management comes not from doing the job of everyone else, but rather recognizing that when an organization must adapt to new information, the best person to react is the one nearest the change.  The work of a manager is to create a common vision for his team, empower each individual to act quickly in a changing market, and to foster common language and communication for his team to propagate knowledge for the benefit of the entire organization.
Thank you and congratulations graduates! 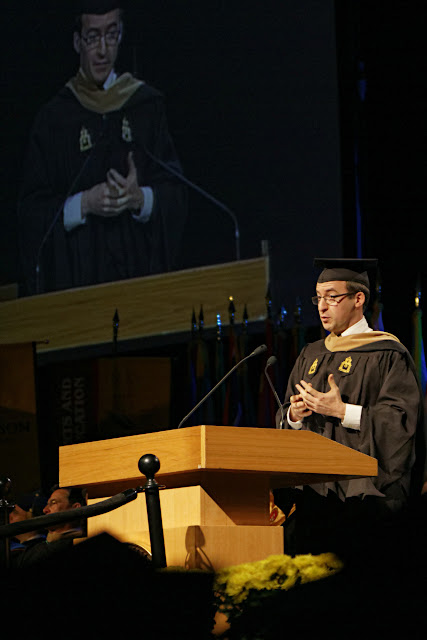