I have been running a science class for a group of homeschool kids, and of course, most of our science focus is on electricity and electronics as you might imagine.  Last time we did an examination of conductors, insulators, and resistors.  We tested paper plates and metal plates, glass goblets and silver goblets, plastic forks and steel forks, and found that a pencil contains a conductor, insulator, and resistor (wood, metal band, graphite).  This week I wanted to teach them about electricity, specifically that everything contains electrons, but that electricity was really the flow of electrons.  To demonstrate the flow of electrons, we made a battery out of a lemon!
The other goal was to learn the scientific method and how to do things methodically.  I had them each keep science notebooks as we went through our journey.  I wanted to teach them a few new words without making things too complex.  I did take a bunch of great class photos, but since I doubt parents would like me posting photos of their kids on my blog, I recreated the photos below for my post.  The kids ranged from ages 3-7, so I had to keep it interesting for everybody (including letting one of them EAT the lemon afterwards!).

All of the kids knew that batteries are the things that make their toys work, so I had them measure the voltage across a real battery first.  Since they didn't know about decimals yet, we made all measurements in millivolts.  We found the battery was 1720 mV, so they wrote that in their notebooks.  The older kids knew 1720 was a big number.

Here is how we did the experiment:

We did not need to use a lemon.  Any citrus or acidic fruit would work, and the same thing could also be done with salt water or vinegar.  The lemon is a particularly memorable thing to use, and I found a bag of 10 lemons for $1 at my local produce store in the overripe bin.
I had the kids measure the voltage across the lemon with my Harbor Freight Cen-Tech multimeter (sorry it's not a Fluke!).  I told them anything below 100mV was likely some small charge or potential caused by the meter leads, but not a real battery.  The lemon measured about 30mV.  I told the kids that the lemon had electrons in it (as does everything), but nothing was causing electrons to flow.
I had some leftover household wiring, so I stripped it and used it as my source of copper.  I explained to the kids that copper is our metal that wants to attract spare electrons.  Our anode is the positive side of the battery, and perhaps this is why Duracell calls their batteries the copper top!
Of course, when the kids measured a pure conductor with the meter, they saw 0mV.
I used a galvanized roofing nail for the cathode.  I also explained to the kids that the nail was really made out of iron (steel), but asked if they knew what happened to iron when it got wet.  I produced a rusty nail for them to see, and explained that the nail was coated in zinc, a more brittle metal (so they wouldn't make the nail out of it), but more resistant to rust.
The zinc nail also measured 0mV.
Next, the kids put a piece of copper wire into each side of the lemon.  As you can see below, the lemon with copper only measured 5mV.

Then they measured the lemon with zinc coated nails only, and measured 41mV. 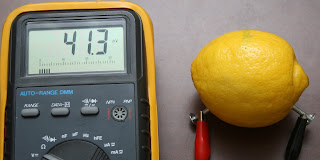 But when a copper nail was put in one side and a zinc nail in the other, they measured over 800mV, a real battery! 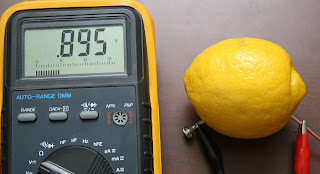 I had each kid take turns with the multimeter and measure their battery.  On the whiteboard, we wrote down the voltages.  850mV, 1020mV, 930mV, 780mV, 823mV, 950mV..... Then we had some fun.  I had all of the kids connect their lemons in series.  During the experiment, we were able to connect up 6 lemon batteries and measured 4800mV (likely some loss as the lemons jiggled around).
Here I replicated the setup with 3 lemons.  We are measuring 2729mV across the lemons. 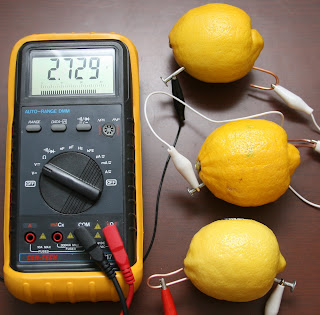 The lemons are now a high enough voltage to illuminate a small red LED.  One lemon alone would not have enough voltage to drive the LED which has a voltage drop of about 1.8V, but 3 lemons is enough.  Of course, one would normally need a current limiting resistor (you would not drive an LED directly with a battery), but lemons current limit themselves.  In fact, we tried to light a small 1.7V flashlight bulb from a 1 cell flashlight and it would not light.
How much current did the lemons produce?  Below you can see a mere 23.7microamps! 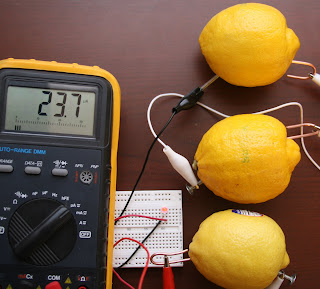 If you're going to repeat this experiment, be sure to hookup the LED in the correct polarity:

With a voltage drop across the LED of about 1.8V and a current of 23.7uA, the 3 lemons are only producing 42uW of power, or about 14uW each.  During the experiment with the kids, I measured about 44uA with 6 lemons.  The flashlight bulb we had was rated to a maximum current of 20mA.  Getting that much power would require over 1000 lemons!
The other accidental experiment we tried occurred when I told a kid to pull the anode from his lemon to break the circuit.  He took the lemon in his left hand and pulled the anode with his right hand.  Everyone was surprised to see the LED did not turn off and the kid was part of the circuit!  We got excited and had a second kid do it.  The LED dimmed, but now we had 6 lemons and 2 kids in series and the LED remained lit.  Once we added a third kid, we could not longer see the LED.  Quite an electrifying experience!
Since the kids were young, they were tired at this point, but I could see doing more with an older class.  For older kids, they could try replacing the cathode with aluminum foil, a normal nail, or pure nickel.  Instead of copper, one could try silver or gold (just put it back in the jewelry box when you're done!).  They could also try different electrolytes to see which worked the best. 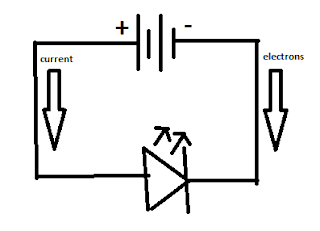 In the last part of the lesson, I introduced the kids to their first electrical engineering rule that made no sense but you had to follow.  I drew a simple schematic for our lemon battery-LED circuit.  I explained about the voltaic pile and how the symbol for a battery represented what we just built.  I explained that when we talk about the flow of current in a circuit, we talk about current flowing from the positive and into the negative (hence the direction of the LED arrow).  But didn't we just learn that current flows from the cathode that has extra electrons into the anode that has fewer electrons, or from negative to positive?
Indeed we did, and that's where physics ends and engineering begins!
Why is it so?  I believe that many of these rules were written long before the physics was understood, and even once we knew how current really flowed, the rules could not be changed.
Do you have any other wacky electrical engineering rules that you accept as normal but sound funny when explained to a kid?  Write it in my comments field!
Posted by Joel Avrunin at 11:33 PM